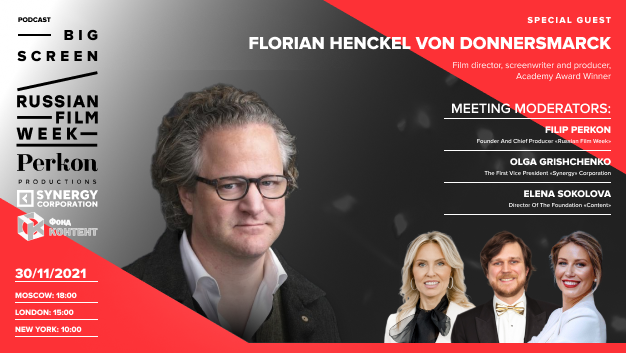 November 30, 6-7 pm (UK): the Russian Film Week festival will host an online meeting between the Oscar-winning director Florian Henckel von Donnersmarck and young people from Russia and the UK, which will include a Q&A session. Where do you start when you decide to become a filmmaker? How to create films that open borders?

The event organisers — Filip Perkon, founder and general producer of the Russian Film Week festival, Synergy Corporation and the Content Foundation — are proud to present this opportunity to the next generation of Russian and international filmmakers. The project is aimed at helping aspiring Russian and British young cinematographers make the right decisions at the very start of their professional journey. The event is primarily aimed at high school and college students who are interested in directing, screenwriting or acting and gives participants an opportunity to meet an international community of like-minded people.

Florian Henckel von Donnersmarck — Oscar and BAFTA award-winning producer, screenwriter and director of such blockbusters as "The Lives of Others", "The Tourist" and "Never Look Away"- will talk about his work and challenges that young filmmakers might face today; he’ll also answer questions from the audience. The conversation will last for an hour. For the first time Florian Henckel Von Donnersmark will be available to respond to comments from the Russian audience on his new Twitter and Instagram accounts: https://twitter.com/donnersmarck, https://instagram.com/donnersmarck.

November 30, 6-7 pm (UK): listen to the "Big Screen" podcast and join our online discussion on the Synergy.Online platform. The event will be part of the annual Russian Film Week in London. For the sixth year running, it is organised by Filip Perkon, founder and general producer of the Russian Film Week, and Vadim Lobov, president of Synergy Corporation. This year, the UK audience will see more than 20 of the best Russian films from last year, including "Petrovs’ Flu" by Kirill Serebrennikov, "Sin" by Andrei Konchalovsky, "Three" by Anna Melikyan, "The North Wind" by Renata Litvinova, "V2. Escape from Hell" by Timur Bekmambetov, etc.